Why Invest in Gold

According to World Gold Council, there is a depletion of western investors’ Exchange-Traded Fund (EFT) position in 2013. Consumers demand such as jewellery and gold bar and gold coin remained very strong in 3rd quarter 2013 with approximately 72% of gold demand. Furthermore, central banks continued to add gold reserves at a slower rate.

Shortage of gold supply and demand, gold price would perform better in 2014.
Thomson Reuters GFMS of World Gold Council claimed that the supply of gold decreased by 3% and there was a sharp fall by 1145.5 tonnes in gold recycling activity more than offset a modest increase in mine production. One of the significance factors that affected gold supply is the implosion in South Africa’s gold mining industry like labour strike, higher labour and power costs, time consuming for mining maturing assets, electricity shortages and political interference. It is expected that will be shortage of gold supply in 2014. Moreover, India is the world 2nd largest sources of gold demand with 720 tonnes of consumers demand in 2013. However, Indian government impose tariffs on gold imports to ease the India’s account deficit. It affected the 3rd quarter gold demand by dropping 148 tonnes of gold. If the government restriction will be removed in 2014, it will create a large effect on demand for gold. This results in pressure on gold supply chain. When supply of gold unable to fulfil gold demand, gold price would likely have performed better in 2014.

Weak global gold production and changes in gold industry responding, gold price is expected to bounce back in 2014.
Citigroup Research investigated that gold mining companies worldwide are struggling from the gold prices plunged dramatically in 2013. 98% of the industry bears production costs matching or exceeding gold’s sale price. Gold companies have continued to cut capex, exploration, and corporate costs dues to the price pressure environment. According to PWC 2013 Global Gold Price Report, now miners are more focused on the bottom-line. Jamie Sokalsky, president and CEO of Barrick Gold Corporation claimed that the gold mining industry overall is becoming more disciplined in their capital spending. Shareholders no longer focused on operating cash flow and more focused on real cash generate from the business. Therefore, mining companies started to shift their business strategy from focused predominantly on increasing production to a strategy focused on increasing rate of return on each ounce. However, per unit costs would have risen dramatically faster if capital spending were less. Citigroup Research found global gold production fell by 5%, with unit costs rising 16% per annually. Number of projects need to be cut off and unable to maintain production levels due to the low gold’s sale price. Also, it results in delayed mine development and exploration budgets. Based on the Casey Research, it shows precipitous decline in the number of drilling projects around the world in 2013. 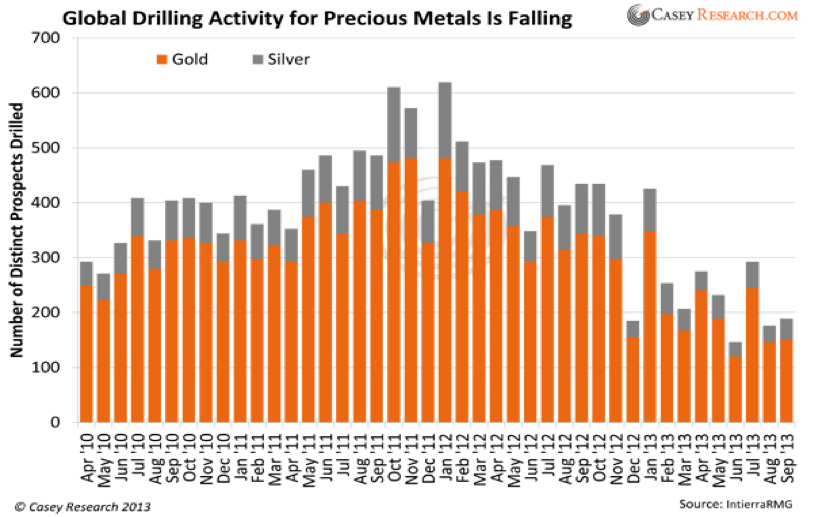 In addition, gold mining industry also faces heavy impairment charges, debt burdens and uncertainty over U.S. monetary policy. When lower gold production unable to meet with the increasing gold demand, bounce back in gold price may be possible in 2014. 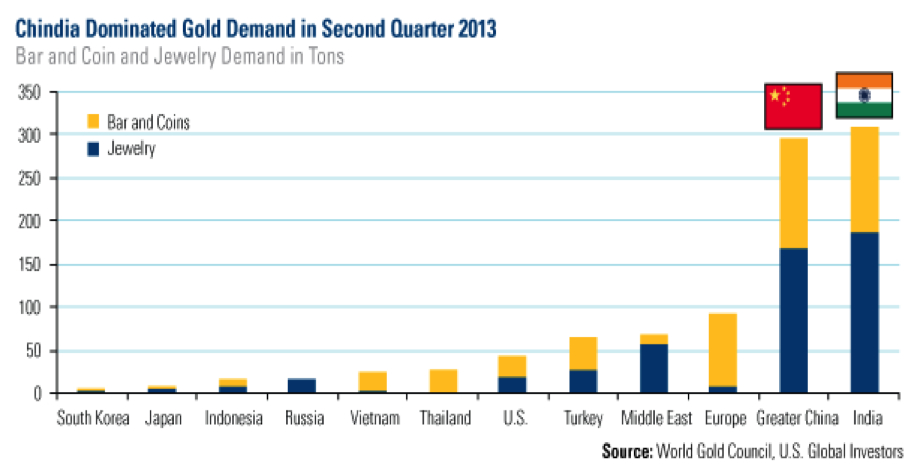 Evolving of gold market structure, increasing gold demand in China and India.
Prior to the financial crisis, consumers demand like gold bar and gold coin and EFT demand (paper gold) were positive correlated with each other. However, since then the relationship has been broken. In 2009, investor move in and out EFT market driven by short-term-sentiment. Core investors holding gold as long-term assets, whereas tactical investors continue EFT trading, which experiences volatility. With the gold price pressure, it will leads to continuous outflow of EFT investments and it is possible that people shift to gold bar investment. It is significant that gold flows from West to East. Western investors move sold their gold EFTs and move into equities and other classes of assets. However, the flow of gold from West to East especially China and India, which continues demand for gold bars, jewellery and gold coins. It is expected that their gold demand will continuously to increase by 2014, which will result the gold price to perform better in 2014.

Termination of Quantitative Easing Three (QE3), favour US Dollars and gold price.
In May 2013, the United States (US) Federal Reserve began hinting the stimulus no longer be necessary due to improvement of economy. According to Bloomberg, Federal decision on December 2013 to cut UD$10 billion a month from stimulus program. It is estimated that the borrowing interest rate will raised and investors will divest their equity investment from Asian countries back to the United States. This results in puling cash back into US stock markets and boosting the US economy growth in 2013. It is expected that QE3 will enhance labour market with unemployment rate to only fall to 7.6-7.9% by end of 2013 and 6.7-7.3 % in 2014 from 8.1 % now. Hence, a better employment rate will leads to an increase in the disposable income, which will lead to a stronger buying power and favourable US dollar. Since commodity like gold is rated in US dollars, a lower supply of US dollars may enhance the value of currency, which it is the right time to buy gold due to the appreciation of US dollars.